It is Carnival time in my beautiful country, every year, we party for weeks (don’t worry we find the time and the strength to go to work) until Carnival Monday and Tuesday (the two days before Ash Wednesday) where we dance in the streets wearing beautiful costumes and enjoying the great music that is Soca. It is what we call the greatest show on Earth. Don’t believe me?  Check out these pictures: 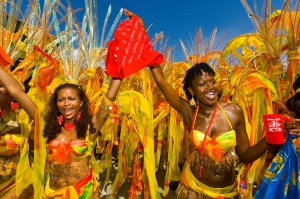 I could put more but then the entire post will just be pictures because there are so many to choose from. If you want to see more, Google Trinidad Carnival.

Now about Soca, according to Wikipedia, “Soca is a style of Caribbean music purportedly originating in Trinidad and Tobago but is also heavily descended from West Africa as in other islands. Soca originally combined the melodic lilting sound of calypso with insistent cadence percussion (which is often electronic in recent music), and Indian musical instruments — particularly the dholak, tabla and dhantal.” It has since evolved, some say that’s a great thing others may disagree but as we say Soca is “we ting” (which means, it is all ours) and we love it.

There are two main types that are sung which are power soca and groovy soca. Power is the faster of the two while groovy is slower. Usually, every Carnival season, there is a good balance of the two, meaning there are great power songs as well as groovy but this year unfortunately the power songs are not the best but there are a whole lot of great groovy songs and I’ll share a few of my favourites.

Last but not least is the best one of them all

Comment below and let me know what you think.