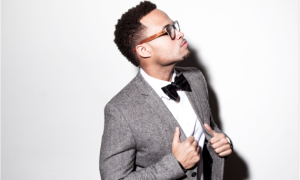 One of my favourite Hip-Hop artists, Dunson, has done his own thing over Jay Z’s ‘Oceans’ on the Magna Carta Holy Grail album and he has not disappointed. From the moment I heard, “you should never leave a hole in your beat especially for a rapper whose flow is unique,” I was hyped.

On Twitter, Dunson said in celebration of his mixtape’s (The Investment) one year anniversary, he would release a freestyle. He explained that the lyrics were aggressive but “that’s just how I felt…wordplay is some of my best yet,” and I have to agree. He also raps about cougars, Michael Phelps, spanking girls with title belts & more, “that’s what happens when you freestyle!” Dunson tweeted.

Made me want to put his mixtape back on my playlist, I am looking forward to an album from this dude.

Listen to the freestyle below:

You can also read my review of The Investment here